Often airflow can be increased by adhering to proper fan maintenance procedures as outlined in fan installation and maintenance literature supplied by AirEng at time of delivery.

Properly aligned and tightened V-belt drives. Fan speed can decrease by as much as 10% to 20% when belts are too loose, with a corresponding loss of airflow (see Figure 1).

Clean airstream surfaces. An industrial fan cannot perform as designed if the airflow surfaces are distorted by contaminants. Even in large fans, 1.5mm of build-up can reduce fan performance.

Check fan rotation. Centrifugal fans will move some air even when running backwards. While some types would use so much horsepower they would trip circuit breakers, other designs could run for years without being detected (see Figure 2).

Check wheel and inlet cone alignment. Components may be out of position due to routine cleaning or painting or the wheel could have shifted during shipment. For backward inclined industrial fans, the relation of wheel to inlet cone is very critical. Even a few millimetres can have a major impact. See figure 3. 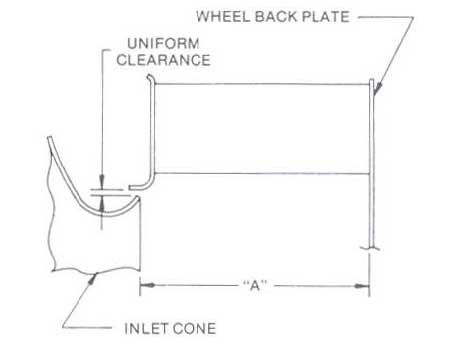 The design and maintenance of the system plays a large role in achieving the overall desired performance. Visual inspections often reveal some easily rectified problems that can significantly impair performance.

Eliminate System leaks. Any leaks in the ductwork will contribute to reduced performance, especially leaks around plenum bulkheads that can lead to recirculation of air. Worn flexible connectors are a common source of leaks and should be inspected regularly.

Verify that dampers are installed correctly and operating properly. If the damper linkage is out of adjustment, the damper may not be opening completely, thereby reducing performance. If inlet dampers are used, make sure they are installed so that the air is pre-spun in the same direction as wheel rotation (see figure 4). If the air distribution system employs balancing dampers, make sure they are set properly.

For all dampers, make sure there is sufficient clearance for the blades to open and close completely without hitting the ductwork or other system components. Last, for systems with either pneumatic or electric controls, make sure damper actuators are operating properly.

Look for system effect. Sharp changes in the direction of airflow at either the fan inlet or outlet will disrupt the flow through the fan and impair performance. If it is impossible to straighten the ductwork entering and leaving the fan, the use of inlet boxes and turning vanes can minimize performance losses as shown in Figure 5. 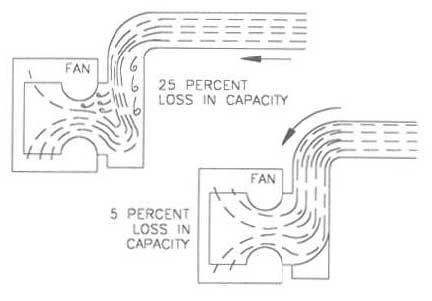 One of the easiest solutions to low airflow problems is speeding up the fan. While airflow is increased by speeding up the fan, so too are static pressure, noise, and power requirements. Figure 6 presents this graphically. Therefore, while increasing the fan’s speed is an easy procedure with low first cost, the additional operating expense over time makes it the most expensive solution. 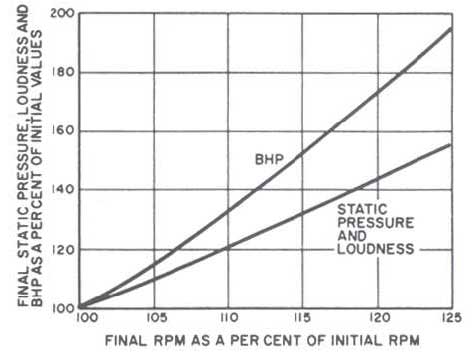 Figure 6 – The effects on brake power, static pressure and sound when fan speed is increased

On a first-cost basis, adding or replacing fan equipment is the most expensive alternative. However, on a life-cycle-cost basis, considering operating and maintenance expense, it can be the least expensive, as compared to increasing the speed of an existing fan.

Sometimes a second fan may be added, either in series or parallel with the original, although it may be more cost effective to simply upgrade the system with a new fan capable of the required airflow and pressure.

Adding another fan in series will increase the airflow because of the additional pressure. The operating point of the new system moves further out/up the system curve. Where duct size is adequate to handle the desired amount of air but the existing fan doesn’t provide sufficient pressure, a second fan in series may be the best solution. However, make sure the ductwork can handle the increase in pressure.

Adding another fan in parallel with the first will increase airflow due to the combined capacities. Because capacities are being combined instead of pressures, a greater increase in airflow will result for a given system. However, system pressures will also increase and caution is required to avoid the unstable operating area of the combined fan system.

In conclusion, when more air is required, it is important to investigate the system on a step-by-step basis, considering the least expensive possibilities first. For existing systems that seem to have lost performance, fan and system maintenance is the place to start.

Often, simply improving the efficiency of existing components will suffice. For systems that require greater airflow and/or pressure, increased fan speed is generally the first alternative. However, when large increases in performance are required, there may be no alternative but to purchase a larger fan.